Every summer, Queen Elizabeth I would leave her great palaces, which were all in or around London, and embark on a tour of her country. These tours were called 'progresses' and the Queen enjoyed them very much. They were a kind of holiday for her, a refreshing change from all the tensions of court life, and were a wonderful way for her to meet her ordinary subjects. Her people enjoyed these progresses too, as it was a chance for them to see their beloved Queen, and over the course of her reign, Queen Elizabeth visited many cities, towns and villages in England.

A royal progress took a lot of preparation, however, and the Queen's ministers, courtiers, and servants did not share her enthusiasm for them. In fact, all the work involved, and all the dangers public travel constituted for the Queen, caused them a lot of headaches! But the work was worth it as the progresses were always a great success. The Queen would leave in procession from one of her palaces, seated on a horse or in a litter or coach, and her courtiers would accompany her, followed by hundreds of carts carrying their goods.

As the Queen travelled slowly, and was entertained along the way by her excited subjects, not many miles would be covered in a day. This meant that only a few towns and villages could be visited on each progress, so the Queen tried to visit different parts of the country every year. Her dream was to one day visit Wales, the land of her ancestors, but sadly she never made it. The furthest west she got was Bristol. The Queen loved Bristol, especially the church of St Mary Redcliffe, which she described as the fairest and goodliest in England!


Along the way, the Queen would stay in the great houses of her aristocratic subjects. This was a great honour for the lord or lady of the house, but a mixed blessing as playing host to the Queen and her court was phenomenally expensive! Not only did they have to provide elaborate entertainments, but they had to accommodate hundreds of people and feed them all. The houses were never big enough to sleep everyone, but some had so little room that extensions had to be built! Some nobles got into debt and some were even made bankrupt!

Wherever the Queen went, people would flock to see her, and Elizabeth would often stop her horse or litter to talk with them. The Queen had a great way with people, always knowing the right thing to say and do, and enjoyed talking to her poor subjects as much as her rich. She had the common touch and this was something her Stuart successors lacked. Indeed, Sir Walter Raleigh once told King James I that one of the reasons Queen Elizabeth had been so popular was because she was "a queen of the poor as well as the rich". The Queen loved the pagents the poor people put on for her, even though they were not as sophisticated as the ones at court, and always appreciated their gifts, great and small.


For security reasons, sometimes it was necessary for the Queen to change routes at the last minute, but most of the time the progresses went as planned. When they were told of an impending visit, the residents of cities, towns and villages, would clean up their streets, mend roads, fix bridges, and decorate their houses. They wanted to impress! In 1573, the people of Sandwich in Kent went to extraordinary lengths to welcome their Queen. They strew the streets with flowers, placed a gilt lion and dragon at their gates, decorated the house the Queen was staying in with poems in her praise, and the town's chief wives presented the Queen with a banquet of over a 150 different dishes! In 1578, the town of Norwich also went to great trouble to welcome their Queen. The Queen was met by 60 young men, all dressed in black and yellow satin, and by a procession of the city's most important people, including the mayor and alderman.

Elizabeth I arrives at Kenilworth Castle (1575)


Among the many places visited by the Queen are Warwick, Kenilworth, Oxford, Cambridge, Salisbury, Coventry, Bath, Chichester (which the Queen is said to have described as "a little London"), Southampton, Northampton, Hastings, Colchester, Ipswich, Harwich, Canterbury, Harlow, Worcester, and Huntingdon.

For a list of more places the Queen stayed in, please see Queen Elizabeth Slept Here! 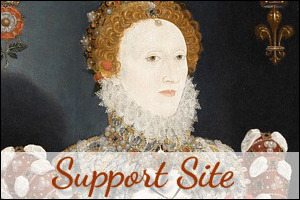